"The Pearl of the Adriatic" - Dubrovnik

History, history history.
A wealthy trade centre throughout the middle ages and into the renaissance, it has been ruled by many different empires over the last millennium, but through it all has maintained its unique style and liberty. Despite being separated by a small part of Bosnia Herzegovina from the rest of Croatia it is passionately Croatian as was demonstrated most recently in the 'Homeland War' of 1991-1992, Dubrovnik is a mecca for ALL the tourist cruise ships that pull into the port and as you walk around you are constantly dodging through large groups of tour people all wearing headphones and following a guide who is carrying a number in the air for everyone to follow while they race through their itinerary providing a potted history. There is some movement to try to manage the no. of cruise ships allowed into Dubrovnik each day but as Croatia is fairly dependent on the tourist dollar/euro/kuna it will be interesting to see how they manage the compromise. 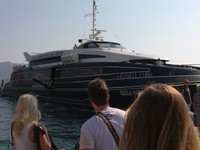 Dubrovnik is also famous as one of the sites for the filming of "Game of Thrones' and looking at the city walls you can see why, the city walls are stunning, sweeping directly up from the Adriatic with imposing turrets and bastions. The 'old city' covers quite a large area and reflects its long history of trade, political organisation and religion (predominantly Roman Catholic) so there are massive churches and Cathedrals everywhere. Their government was not unlike that modelled in Venice during the same period of time. Elected leaders who rotated through their responsibilities in administering governance, and as a result I think that it was far more prosperous than those who had monarchies.

The end of another great day.

As Yugoslavia began to unravel at the beginning of the 1990's Serbia wished to consolidate a greater Serbia by incorporating Croatia and Bosnia under their control, to that end they attacked Croatia shortly after the Croatians had declared their intention for an independent, free country. As a part of achieving their goal Serbia attacked Dubrovnik, an area everyone believed would be safe because of its World Heritage status.
The attack was brutal and the Croatians were unprepared, believing they would be safe. Dubrovnik is surrounded by harsh, rocky mountains that look right down into its heart and the enemy used this to their strategic advantage. We took a cable car to the top of the hill behind Dubrovnik where much of the battle took place. there is an old fort there built by Napoleon at the beginning of the 1800's. As well as offering breathtaking views the old fortress houses a museum which explains the events that took place during 1990-1992. Reading between the lines you can 'hear' the passionate sense of injustice they felt, both in response to the unrelenting barrage they experienced on their beloved home, but also disappointment in the international communities response in that they held back from intervening stating that it was a 'tit for tat' battle. You also see a story of brave partisans who were prepared to sacrifice all for their freedom.. I think history is yet to tell the whole story.

We also visited a number of historic sites; the beautiful Franciscan Monastery (structurally very reminiscent of Mont Saint Michel on the coast of France), they were world renowned for their work in the creation and use of pharmaceutical drugs. Other sites included a Jewish synagogue, and a variety of museums. We also walked the wall, about 2 km in the blazing sun but an amazing structure which included lots of climbing, we explored the Old Port and, a highlight, we found a spot near the wall where people were able to swim, the rocks were 'tricky' but the water is sublime, it is so clear and buoyant and as you swim you are looking at the city walls and centuries of breathtaking history, truly memorable. 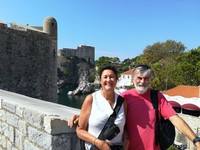 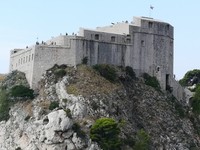 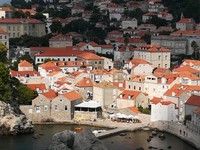 Ended the day off with a swim at one of the famous Dubrovnik swimming sites.

Posted by Seniorcitizens 07:21 Archived in Croatia