Caravans trading in silks, spices and crafted goods travelled through the stunning countryside of what is now Bosnia and Herzegovina, they had come from cities like Trieste, Venice, or Zagreb and were heading to Sarajevo, Split, and Dubrovnik. They would travel through Mostar because there was a bridge that crossed the Neretva River, it was also a place they could trade with. In 1557 a beautiful stone bridge was constructed to replace a chain and timber bridge. The bridge has a single vault/arch but its unique design is stunningly beautiful as the vault rises higher than other bridges built with a single vault giving it a beautiful profile. The bridge itself is assembled with individually cut local stone shaped toward the apex, held together with pegs of iron which have had liquid lead poured on the pegs. The technology to create this with only hand tools is amazing and the testament to its strength is that it remained standing until 1993 when shelling from Croatia destroyed it. It has since been rebuilt following all the original designs, materials and technology with the help of the Global Heritage Fund. Because of the height of the vault it is quite steep and its marble surface is punctuated with raised sections about every step and a half along. On one of the days we were there it was raining and the surface is quite slippery. 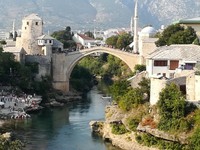 Diving from the bridge is a celebrated activity (particularly among young males) the bridge is 24m high and the river is recorded as being very cold, we watched as one young man jumped while his mate collected funds from the crowd for the feat. Tourists are warned about performing the task themselves without appropriate training. NO, neither of us were tempted. Again we were amazed at how the night sky lit up as the sun went down on our first day there. 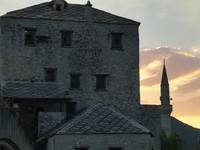 Like Sarajevo, Mostar has a predominantly Muslim community with some very ancient mosques, we climbed to the top of one of the minarets where the call to prayer is delivered from. View amazing, spiral staircase confronting. The old town is still much as it would have appeared to those early caravans who passed through; lots of tiny shops selling local trades, leather, wood, jewellery, manchester and local foods. The ancient road is made of hundreds of pebbles set on edge in a composite material, making it very difficult to walk along and while we were there the wind blew up and a storm came through. Avoiding the rain we managed to catch up on yet another War Museum focusing on the victims of the '92-'95 conflict and through the town are messages saying; "Don't Forget 1995". 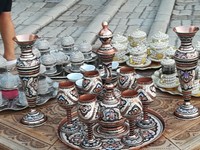 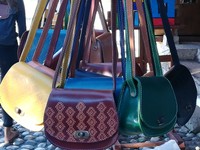 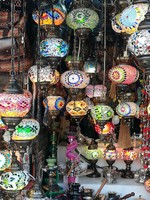 We also travelled to an unusual monastery, it was built by Sufi acolytes called Dervishes. Growing up I remember my Dad talking about The Whirling Dervishes, I think that he might have used it to sometimes describe how I might conduct myself, I thought it was his exaggeration, pointing out how wild I was, but it turns out that they are a real and ancient group of Muslim mystics who would achieve a state of intense worship by whirling around and around . There are still groups of Dervishes who meet and practise their form of worship and this monastery, which is over 500 years old was one of them. It is nestled in the most sublime setting, as we followed the river down toward it it reminded me very much of Mt Beauty in autumn. The monastery is right on the river at the base of imposing rocky mountains and behind it all is the restful sound of water trickling down little falls. From across the river you are able to capture beautiful reflections in the water. 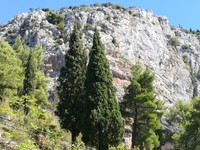 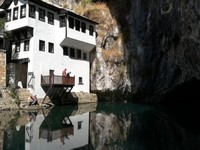 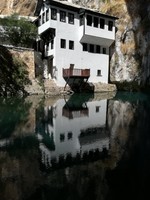 We left Bosnia for Dubrovnik to fly to Athens, a bit of a shock after checking in as a bus drove us out to our plane waiting at the end of the tarmac it was a small plane with two propellers!!!!!

Posted by Seniorcitizens 11:06 Archived in Bosnia And Herzegovina