Athens - The Birthplace of Democracy!!!

Our final stop - and it feels like we are ready for home!

To be fair we have probably not done Athens justice, we are tired, the weather was very ordinary and my brain is overloaded with information, I just can't take in any more and process it. Travelled by train and after rail systems which work with precision Athens is a little more 'laid-back'

We made the compulsory trek to the Acropolis which did take my breath away as we emerged from the underground to see it just sitting regally above the city. John was starting to feel a little bit over "more broken rocks" and there have been quite a lot of late.
It is quite phenomenal to see it sitting so close and for structures between 2 to 4 thousand years old they aren't in too bad a shape, they must have been inspiring for those who lived there at the time (that is, if you weren't a slave). To look across the city at the imposing structures would have filled you with a sense of being invincible and of having reached the pinnacle of human achievement , which to some measure they had. Thinking about this perspective does give you pause to reflect on how we in the 21st century view our achievements. 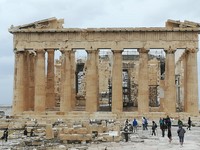 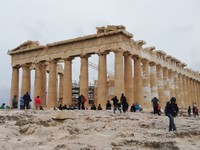 The crowds there were overwhelming, cruise ships unload large groups of tourists and they all make their way to the Acropolis. Along with gale force wind and the experience of queueing amongst the ancient ruins with dust flicking up it was a little challenging but we did view the Parthenon and the robed female figures who act as columns supporting a temple. Whilst the site is centuries old it is still used for various events, while we were there people were setting up for a performance in the amphitheatre which still has the seats engraved with names of special attendees including Hadrian who initiated many massive building projects throughout Athens to repair much of the damage caused by the Persian invasion 500 years earlier. Wandering around some of the ruins, particularly Zeus's Temple with the overcast skies and grey/green conifers it brought to mind all those images of the Romantic artists who on the 'tour' would paint exotic images of what they were seeing.

We also visited the Acropolis museum and other ancient sites around the city, most were in equally poor repair and almost every site we visited seemed to have an ancient, very arthritic dog who would oversee the visitors.

That's it for touring. Off to catch our flight home, via Dubai; see you all soon.

Posted by Seniorcitizens 00:33 Archived in Greece