You may have never heard of this place before, but 5 years ago when we travelled through Europe in our RV this was a highlight and it is the one place we promised ourselves we would return to. You can't stop looking because it has breathtaking views in every direction, our Air B&B had sloping ceilings with the windows in the roof!!!!!! The view out our window was like and amazing photo on the wall. 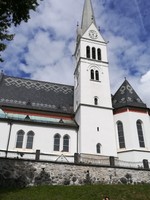 Lake Bled is a retreat for the well to do. At the centre is a blue glaciated lake (like in NZ) which is surrounded by striking mountains and stunning medieval structures, you can't stop taking photos (promise not to bore you with too many)
Slovenia was a part of the old Yugoslavia until the early 90's and it is making its own way, proudly holding onto history and tradition from long before the communist era.
Like all countries in this area, it has an amazingly long history with castles and churches from well over 1000 years ago. There is an island in the midst of the lake, the only island in Slovenia with a beautiful medieval church from which you can hear the bells ringing. The church is a frequent venue for weddings, there are 99 steps up to it and tradition tells that it is good luck for the groom to carry his bride up the steps and then ring the bell. Apparently potential grooms practise for it by carrying sandbags up the stairs. 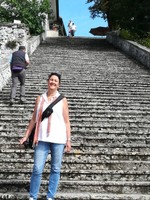 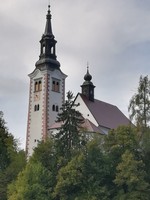 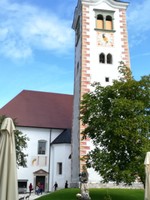 You travel to the island on a traditional rowing boat called a Plenta it is a flat bottomed rowing boat which carries about 20 passengers, at the bow there is a platform on which the rower stands, they have developed a unique style of rowing. 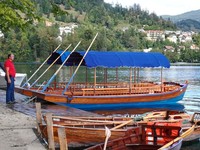 There was also a medieval castle (up another hill!!!!!) again stunning and , I hate to say it, well worth the climb.
On the banks of the lake there is an imposing looking building facing directly toward the island with its own private tea rooms, this was Tito's summer residence, looks like nothing was spared in its building. 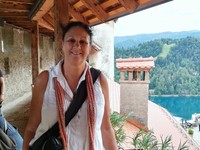 The Lake too is a training area for rowing, many world rowing championships have been held here, Slovenia is renowned for its rowers and has gold medals from a number of Olympics including Sydney 2000.