Cycling in the Netherlands

After a "teary" farewell to 'Patience' our rental car at Warsaw airport we were ready to fly to Amsterdam, a major debacle at the airport. Poor planning on behalf of the airlines led to fairly angry reactions from passengers that nearly led to blows in a couple of cases.
Picked up a new rental at Schipol airport, and met John's brother, Keith who directed us back to his place in Delft. We set off the next day with Keith and Gerda to Groningwen in the North East corner of the Netherlands. Keith had organised a couple of bike rides through the local countryside following a well-prepared set of pathways through farmland and small villages, it was a lovely way to see the country and so relaxing stopping for cake, coffee or beers.

We came across some amazing rock collections called Hunabeds which archaeologists believe were burial sites for the stone age people from over 6,000 years ago. The rocks are not local to the area but it is believed that they travelled there in glacial movement from the Nordic countries. 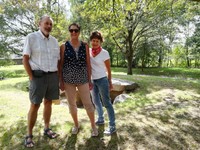 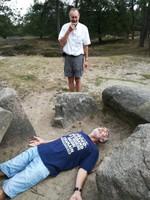 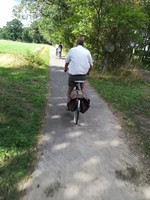 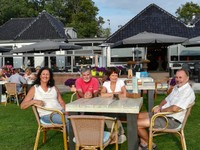 At one spot we came to a wide canal where we needed to cross on a tiny ferry. along with the four of us another couple came along too. This craft was tethered to a cable that took it across the canal, and the three men took turns winding the handle to gradually pull us across the water.
We also saw storks nests (actually we had been seeing them all through Eastern Europe ) but this time with a stork nesting in it. The nest is built of sticks, about the size of a large sunhat and it balances atop a tall pole. 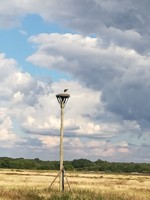 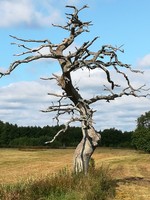 We also visited Westerbork a Dutch concentration camp during WW2 where Dutch Jews were sent to before being transported to one of the many extermination camps. Anne Frank was one of the inmates there. There was an excellent museum and then a bus trip to what is left of the campsite. Gerda's uncle was executed there during the war for listening to 'illegal' radio broadcasts, he was 24. 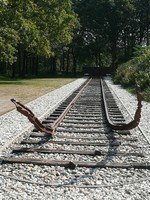 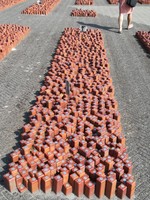 From there we headed off to Goes, south west Holland and John's sister and Jim and Myjanda's wedding.

It took us not quite 3 hours to drive from one corner of the Netherlands to the direct opposite , NE to SW to family in Goes, a great time to catch up with everyone while celebrating Jimmy and Majanda's Wedding on August 24th.

Shared family meals, helped with some setting up at Majanda's family's farm where the wedding was to be held and a catch up also with Brenton who had flown from Australia to be at the wedding too. Lots of excitement at Peter and Sonia's as they shared all the fun they had preparing outfits, caught up with Metha Jim's sister who was 'Best "person" and also MC ing the celebrations and with their other sister Trudy who we had not seen for nearly 16 years. Truly wonderful. 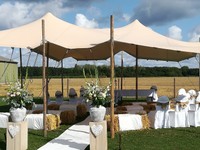 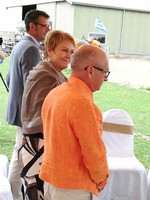 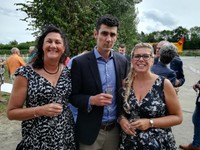 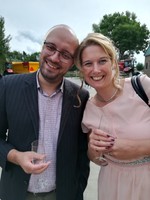 The wedding was at 3pm at Majanda's farm, in Holland you have to have a council wedding prior to the ceremony, they completed this on the Monday and then had a celebrant perform the ceremony under a tent at the farm. Everything was decorated beautifully in what we would call a 'Barn or Rustic theme', we sat on hay bales as the celebrant told the story of their relationship (all in Dutch) but we had thoughtfully been given copies in English by the celebrant and were able to follow on.
When you receive a wedding invitation in Holland special invites are for close friends and family, who attend the ceremony then enjoy a meal together and this is followed by a party where many more friends and wider family attend. There were about 40 guests for the first part with about 160 for the party. The ceremony itself was lovely, very personal and therefore very meaningful for the couple. The only legal requirement for the celebrant to affirm a legal marriage is to hear each of the couple say "yes". In Australia there is more that is required by both the celebrant and the couple to make it legal.
John was asked to propose the 'toast' (in English) which was a lovely honour too. All went extremely well and the happy couple were indeed very happy. 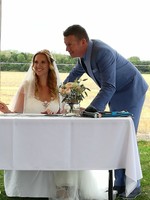 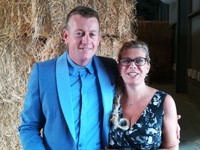 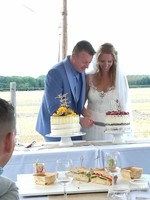 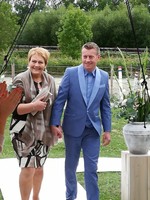 The party was held in a large barn that was decorated with massive pieces of farm machinery, but with all the other decorations it looked amazing, there was a 7 piece band and friends and members of Jimmy's football club had been obviously working on plans for 'payback' with some hilarious performances. Another tradition at a Dutch wedding is toward the end friends hoist the bride and groom on their shoulders which could be quite problematic considering the guests have been celebrating quite energetically for the last few hours. We had great fun. 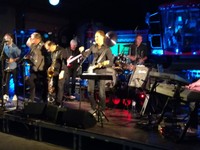 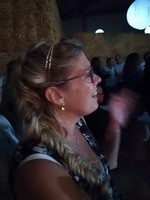 The following few days were given over to family and recovery!! And we made plans with Sonia and Peter to travel together first to Amiens in France to see the Sir John Monash Centre opened April 25th this year and then on to Heidelberg and Munich.